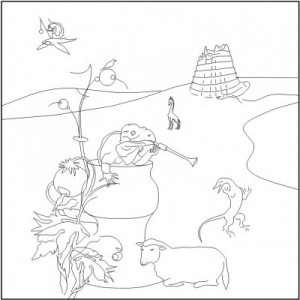 Woo-hoo! My design was accepted for an upcoming exhibition at the Vlakglas museum in Ravenstein, “Inspired by Hieronymus Bosch”.

Here’s my preliminary sketch: a lizard plays a flute-like instrument for several other animals. The other animals are all Bosch-inspired, the lizard is mine. In the background is one of Bosch’s famous works, the Tower of Babel. Now… to find a way to get some dinosaurs in there. (diabolical laughter).

My design, along with many others, will be on exhibit at the Vlakglas museum from January-June 2015.

The new studio is set up, and it’s beautiful. Northern light, airy, roomy, and dreamy. There’s a largish light table still to come and (fingers crossed) and large oven. Large enough to climb into and bake like a pizza. Many thanks to Hubertine and Piet for making it possible!